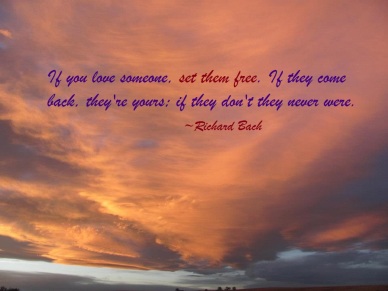 Hello again. Today will be my first cliche day, and I have decided to talk about love, fate, destiny, and this beautiful little gem that the American author, Richard Bach, gave to us: “If you love someone, set them free. If they come back, they’re yours; if they don’t they never were.” We all know the quote; in fact all one needs to say is, “If you love someone…” and whomever is around will join in the, “…set them free.” We do not even need the rest, because it is already engrained into our noggins. (Hopefully everyone reading this now has heard of the quote, hahaha! If not, where have you been?)

Richard Bach is still alive, meaning that this quote is not that old. Older than me, I think, but seriously not old at all. Yet I hear this quote all of the time–in movies, in books, in popular music–this quote worms its way into your subconscious without you even knowing it. So much so, that it has become cliche. But what does it mean? Why would you let them go? How long are you supposed to wait for them to return? What if they get married? Have children? With the divorce rates as they are today, does marrying someone else even matter? When is it too much and you have to let go just to keep your sanity?

I have run into this problem more than once. I am a Leo, and Leos are notoriously in love with love, so we fall easily and we fall hard. I have heard the words, “I love you. You’re perfect. You’re gorgeous. You’re amazing…” but, unfortunately, I am rather unsure if I have ever really had the emotion be real, really be reciprocated. Even with my ex-fiance…I’m not sure if it was real. Could be the reason why I was engaged for five years!! Should I hold onto those? Was it silly to hold onto them in the first place? If they promised ten years ago that they would marry me, is that too long to wait? What if those words are spoken by a teenager, does it really not count then? In fact, should we hold anything against a 13-17 year old, hahaha?! I have been single for almost a decade, and it still bothers me that I have heard the words mentioned above, over and over again, but they never seem to stick. Yet I find myself still believing that I loved them, let them go, and I am just waiting upon their return. Which written out as it is here, I feel a wee bit idiotic, hahaha!

What about this quote: “I don’t understand why destiny allowed some people to meet…when there’s no way for them to be together.” I got that from SumNanQuotes on Tumbler.

In response, maybe this one, from a source unknown: “We don’t meet people by accident. They are meant to cross our path for a reason.”

Is there a lesson to be learned here?

For one particular person, to which all of these quotes are applicable, there is most definitely a lesson. My beautiful little brain can paint the most fantastic pictures of what the future would have looked like with that person. And I found so many little indicators that proved that he was my destiny, that fate was on my side, and we would be together forever. But fate wasn’t on my side; he wasn’t meant to be mine. For awhile, I forced myself to hate that person. I hated him for saying all of the right things and then taking them back; for never meaning them in the first place. Mostly, however, I hated myself for believing them. For painting such ludicrous pretty pictures of the two of us. I hated myself for the event that caused me to actually look at him and see him as a man, as a potential. And when he found someone “new,” I hated myself for hating her.

In the end, I realized that I had lied to myself…a lot. Yeah, maybe he told quite a few fibs himself, but I believed him. I have the exceptional ability to gloss over negative aspects of those I love–I just don’t see them–until that person makes me angry! Then I can point them out in minute detail! And really, once I did that, I am frankly glad that it wasn’t me. Not that he is a bad person, oh no! He still possesses all of those endearing and attractive qualities that I had originally seen in him, he just also possesses all those negative and unattractive qualities that, in fact, I really don’t want in a potential mate. He is not my one. In the end, it was more of this quote, from smschacha.com: “When people can walk away from you, let them walk. Your destiny is never tied to anybody who left…”

I am fairly certain that I have ascertained the reason, the destiny, the fate, the role that we played in each others’ lives. I wonder if he will see it as well some day. In the meantime, my lesson having been learned, I am willing to let him go completely. None of this waiting around for him to come back.

I will end this post with this quote, from Mandy Hale: “Once you make the decision to move on, don’t look back. Your destiny will never be found in the rearview mirror.” 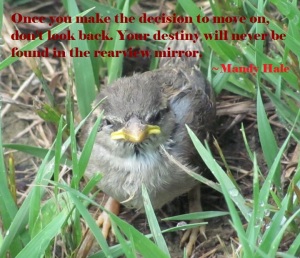 Privacy Policy for funkylollipop.com The privacy of our visitors to funkylollipop.com is important to us. At funkylollipop.com, we recognize that privacy of your personal information is important. Here is information on what types of personal information we receive and collect when you use and visit funkylollipop.com, and how we safeguard your information. We never sell your personal information to third parties. Log Files As with most other websites, we collect and use the data contained in log files. The information in the log files include your IP (internet protocol) address, your ISP (internet service provider, such as AOL or Shaw Cable), the browser you used to visit our site (such as Internet Explorer or Firefox), the time you visited our site and which pages you visited throughout our site. Cookies and Web Beacons We do use cookies to store information, such as your personal preferences when you visit our site. This could include only showing you a popup once in your visit, or the ability to login to some of our features, such as forums. We also use third party advertisements on funkylollipop.com to support our site. Some of these advertisers may use technology such as cookies and web beacons when they advertise on our site, which will also send these advertisers (such as Google through the Google AdSense program) information including your IP address, your ISP , the browser you used to visit our site, and in some cases, whether you have Flash installed. This is generally used for geotargeting purposes (showing New York real estate ads to someone in New York, for example) or showing certain ads based on specific sites visited (such as showing cooking ads to someone who frequents cooking sites). You can chose to disable or selectively turn off our cookies or third-party cookies in your browser settings, or by managing preferences in programs such as Norton Internet Security. However, this can affect how you are able to interact with our site as well as other websites. This could include the inability to login to services or programs, such as logging into forums or accounts.
%d bloggers like this: